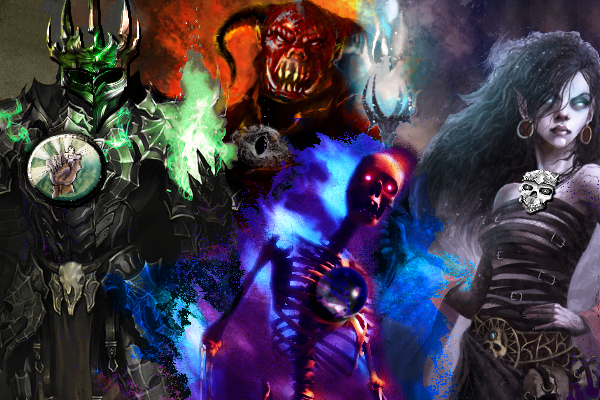 This will be the continuation of the banefall anthology. More posts to come.
A goblin, a trickster, a warrior? A nameless terrible thing, soaked in the blood of a billion galaxies. A most feared being in all the cosmos. Nothing could stop, hold, or reason with it. One day it would just drop out of the sky and tear down your world.
Top

The Tragic Stasis of Dalrosz and Nora

Author Note: Diary entries best dated from between 205 and 200 years before present day

Diary of Erin Renault – Entry 678
Only a month has passed since the Stasis Fiend provided me with the means to treat the scars upon my body. Only a faint pink of new skin reveals their original placement. The creature says only two more weeks of treatments will be required before the evidence completely loses its trace. It will be a relief as the stench of the paste for which is dabbed upon my skin is heinous and its ingredients barely above the word themselves. The return of my previous form seems to greatly encourage Master Dalrosz. In fact, he has been allowing the demon greater freedom than Master Talathar may think judicious if he were consulted. However, the results in inquiry seem to have granted Master Dalrosz almost complete anonymity. Amongst the researchers, he is the only individual to work exclusively with only one summoned being. There are times I think he does not even bother with properly placing the divine or arcane barriers upon the subject as if he were simply inviting such a wise and powerful creature to join him for an afternoon tea.

Diary of Erin Renault – Entry 844
Master Talathar entered the research chambers today during the visit with the Stasis Fiend without notice. It seems there was an accusation against Master Dalrosz by another of the research fellows that his relationship with the Stasis Fiend was clouding his judgement and putting the School at unnecessary risk. The Master had made all the proper preparations today as would be expected before the arrival and both Masters spoke at length after the demon was dismissed. While I could overhear very little, it seems my master worries about undo interference with his experiments because of the jealousy of other researchers in the department due to his results. Master Talathar seemed to do little to dissuade such an accusation, though he also did not confirm it either.

Diary of Erin Renault – Entry 848
Today a letter arrived for Master Dalrosz from the City of Splendors. It was marked with a merchant’s sigil upon the enclosure and looked to be made with finer paper and ink than we possess here at the School, except for official documents. Both he and Master Talathar seemed quite pleased with the contents, but met alone in the chambers and have yet to tell me of its contents.

Diary of Erin Renault – Entry 850
Master Dalrosz has informed me that he has turned our resignation into Dean Sharahaster. While I wish he had consulted me, as his apprentice there seems little I could have done anyway. We have seven days to copy our laboratory notes and books prior to submitting all of the texts to the School’s library before taking our leave. The Master has especially had me focus only on the notes that include Statis Fiend and to skip all others. My first task however is to copy all of the notes of the recovery of my scars into a compendium for future use for which he will present to the School as solely my creation. I think he does this as a small attempt to apologize for not consulting me of our move or the reason behind it as such a text approved for the library would be a great boon to my young career. He has also said that Master Talathar will be sure to steer it properly through the committee.

Diary of Erin Renault – Entry 852
The merchant’s sigil upon the letter is of the powerful Kothont family. It seems the head of the family was only blessed with a daughter before the recent death of his wife. According to his letter, he has heard of the work Master Dalrosz has done directly from Master Talathar. While I know not of my master’s origin, he does not seem to be of a wealthy family from his rather meager trappings and his hording of his own personal funds. Thus, I am not surprised that he would agree to the arrangement presented to him. The daughter of Alauos Kothont suffers from a strange curse or medical condition that is slowly draining her of her energy. Merchant Kothont is offering his house to Master Dalrosz through marriage with his daughter and taking the family’s name. In exchange, Master Dalrosz will be tasked to cure Nora Kothont, the merchant’s daughter, through any method required, even if it is to ask the Statis Fiend for assistance as had been done with my scars. The management of the merchant house will continue under Alauos, Nora, and the other members of the household. It seems we will have almost unlimited resource available for the problem in front of us and all future ones that strike my master’s interest as the merchant house is hundreds of years old and one of the most wealthy and respected in Waterdeep. I look forward to my first glimpse of the City of Splendor!
Top

Kharnnath the Destroyer, the early years.

In the beginning, Walpurgis was born to serve Bane. Walpurgis performed his duties as a page for the Knights of the Black Gauntlet. He learned early on that failure would not be tolerated and was often flogged, beaten and pitted against other pages whether for punishment or for the sadistic enjoyment of a depraved knight.

As humans began to push forth into once elven dominated lands of Cormanthyr, knights bound to the orders of Tyr and Bane take up crusades within Cormanthyr determined to purify the region with a holy fire. Divine providence as their justification, these Templars brought devastation to the lands. A Tyrran Knight known as Sir Quinton Feldham pledged that the wicked within the region would be converted or face death. This Tyrran Templar had great success with his campaign as he drove the knights of the Black Gauntlet near to their breaking point.

In a great battle where Sir Feldham destroyed the forces of the Bane Knight Menzebul, Walpurgis, who was still a page, was taken captive. Walpurgis would endure great tortures at the hands of his Tyrran purifier and in the end his will would be broken, much as any mortal’s would. As a convert, Walpurgis would be conscripted into Sir Feldham’s forces where his prowess and devotion soon caught the eye of his superiors. Walpurgis was the epitome of the basic idea that ran Feldham’s crusade in Cormanthyr. However, nothing is ever that simple when it concerns the god Bane. For He has eternity to scheme and claim what should be his, and soon He would set a single piece of this puzzle into place. That piece would be Walpurgis.

In a later battle between Tyrran crusaders and the demonic forces spawned from the labyrinth beneath Zhentil Keep, Walpurgis again found himself a prisoner of war. Though this time he would be taken to Stallach de Benadi, the first High Imperceptor of Bane and creator of the once vast empire beneath Zhentil Keep. It would be Stallach Benadi that lifted the veil of lies shrouding Walpurgis’ eyes. Benadi bestowed upon Walpurgis a great light, showing him the error of his ways and cleansing the Tyrran perversions from his mind. Walpurgis paid for his sins to Bane with flesh and blood, enduring torturous redemption at the hands of zealous maniacs residing in the depth of Stallach Benadi’s fortress. For all must suffer for their sins or forgiveness is empty.

Walpurgis as he was meant to be, uncorrupted by Tyr and born again by Bane’s will, emerged battered and tortured from the fortress below Zhentil Keep, set loose by Benadi. Walpurgis would eventually find his way back to Feldham’s army, broken and battered. Sir Feldham saw what he wanted to see, a convert so driven by the power and virtue of Tyr that he could endure unspeakable tortures at the hands of depraved Banites, and yet still maintain the willpower to escape their villainous clutches and return to fight once again. The trap that would lead to Feldham’s demise had been set. On a moonless night so dark that it seemed as if the black hand of Bane had plucked the stars from the sky, Walpurgis sprang the trap which allowed the hellish army of the Black Gauntlet to enter Tyrran fortress and utterly destroy everyone inside.
Top

The rise of Walpurgis continued…

It wasn’t until the very end that Sir Feldham of Tyr finally saw his folly, he was face to face with it after all. Walpurgis stood there before him, a cold and calculated look was the only expression he displayed when his dagger sunk deep into the Tyrran knight’s abdomen. As the dark red blood from his liver dripped to the ground, Sir Feldham was forced to watch the slaughter in anguish until the woeful cries of his mutilated soldiers eventually ceased. Walpurgis had no words for the knight, no prayers, no pity and the knight had none for Walpurgis in return.

There were only a few sounds that could be heard now, like the clicking and clinging of crows’ beaks as they picked apart the bloated bodies strewn across the field and the heavy, undulated breathing of a mortally wounded Tyrran knight. Sir Feldham’s labored breaths were quickly turned into a grotesque gurgle as Walpurgis methodically carved through the flesh and viscera of his neck. Sir Feldham’s severed head firmly in Walpurgis’ hands and the defeated Tyrran Knight’s body slumping lifelessly to the ground finally signified an end to the night from hell.

However, this was not Walpurgis’ victory and Sir Feldham’s head was not his trophy. So, the dutiful son of Bane returned to Zhentil Keep and relinquished the disembodied prize to Stallach Benadi, its rightful owner. Walpurgis’ role in the triumphant victory over the Tyrran Crusaders would not go unrewarded though.

Stallach Benadi bestowed upon Walpurgis a great accolade, and when Walpurgis rose a Bane Knight he became something more than just evil. His was filled with an unquenchable thirst for blood and fueled by an unrelenting hatred. He was now more than just a murderer, he was a cold and calculating serial killer. He was more than just a crusader, he was the embodiment of Tyranny. And while Benadi’s hopes were more than high for his newest knight, even he could not have foreseen the astonishing terrors that Walpurgis would bring to Cormanthyr.

What follows is the first-hand account of an elven defender fighting against the crusading forces of the Bane Knight Walpurgis. The elven warrior wished her identity to remain anonymous:

"I have never felt it before, something so primal I can only describe as true fear. The source of which was a man wreathed in constant shadow and standing triumphantly upon the mangled corpses of his vanquished foes, my brothers and sisters. His pale armor was marred and stained with blood, yet through the viscera I could see it was emblazoned with a black gauntlet grasping a templar’s crux. In his iniquitous hands was a massive sword consumed in flames from the reflection of the inferno around him. The flickering of the hellfire only ceased when the blade was drenched in elven blood. Finally, I felt his cold, malevolent gaze fix upon me. I knew then only to run."
Top
Post Reply
5 posts • Page 1 of 1