To post role-play stories, logs from the game, and in character news of note.
Post Reply
7 posts • Page 1 of 1 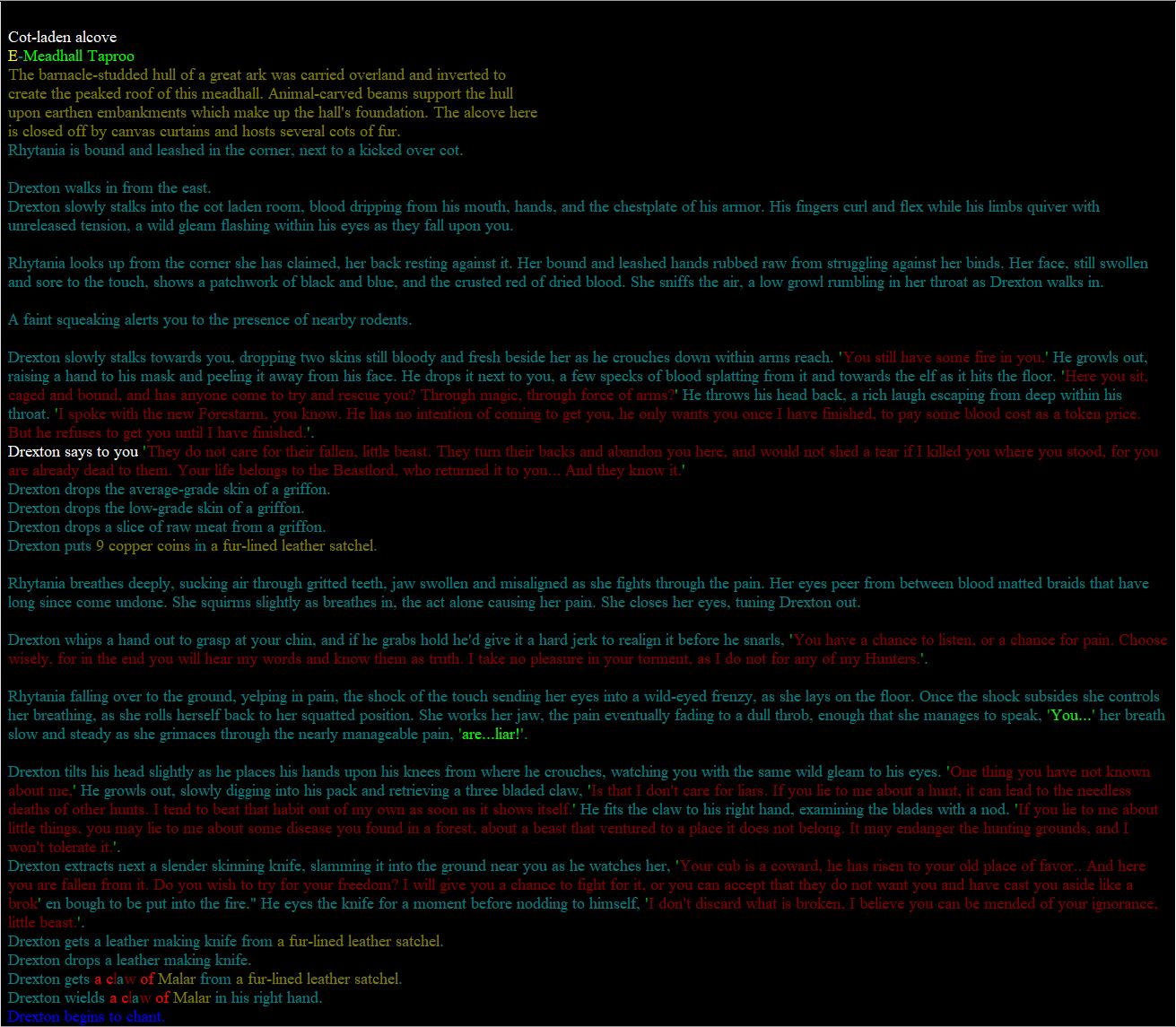 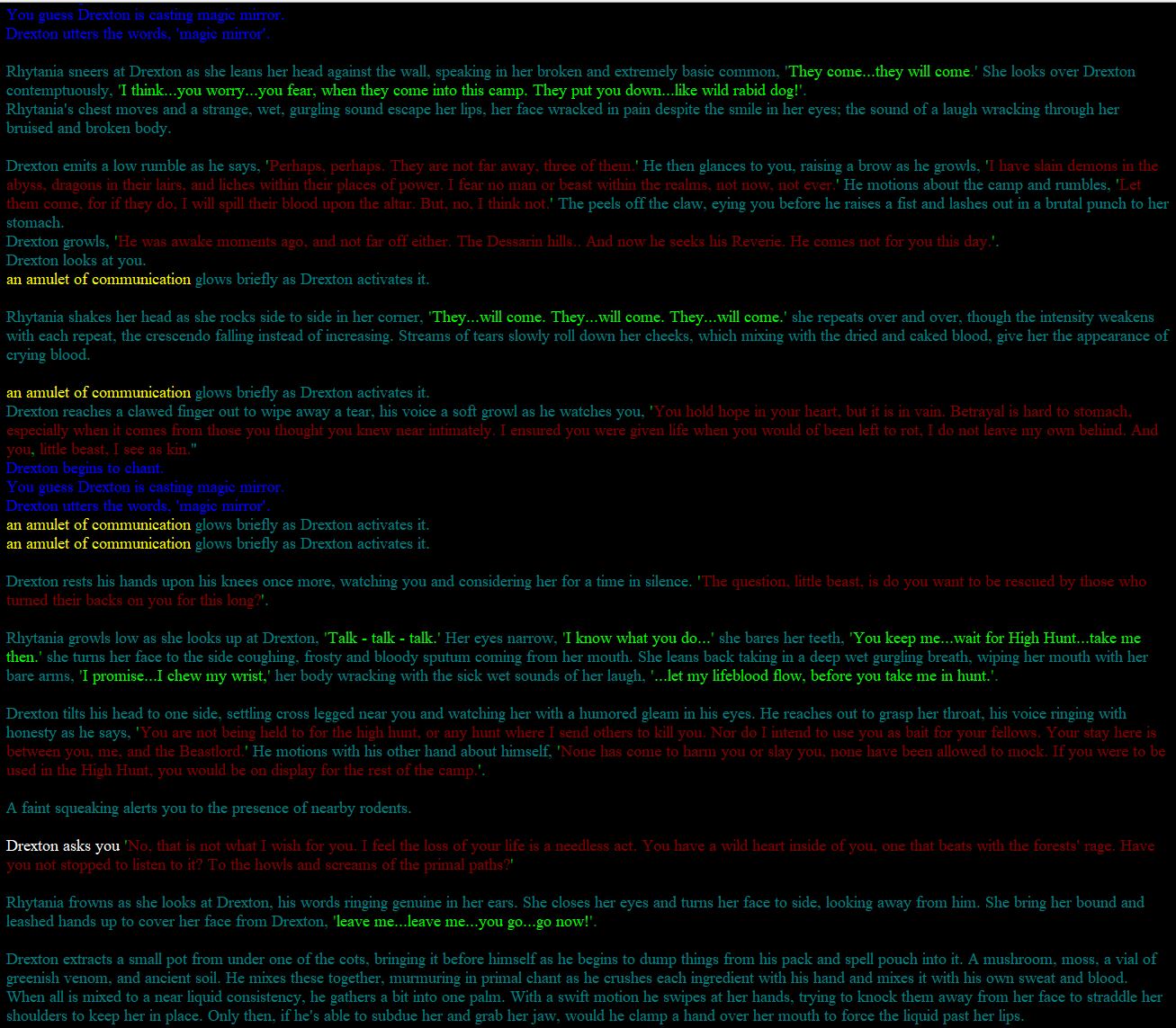 I love how the story is progressing. DEFINITELY looking forward to the next 'chapter'!

Thank you! And a big thank you to all involved in this unfolding RP.
Top

Thank you for the logs. Awesome!
If you don't know where you're going, any road will take you there.
Top

The trees standing in this patch of the untouched old-growth forest look on as silent guardians in this area, centuries if not millennia old. The moss as thick and plentiful as the undergrowth of dead limbs, leaves, and young saplings trying to compete for resources in the soil, air, and sun. Rays of sunlight barely able to pierce through the canopy far overhead. The wood is alive, acting as home and safe harbor to the hundreds of species that have co-existed here since the first saplings took root.
Rhytania looks over at Drexton, the blood, and gore from her latest kill up to her elbows, her mouth and lips dripping from the deep dark blood. She looks exhausted as she hardens her will to the grim task ahead. The bite mark on the deer's neck and its multitude of scratches and deep cuts tell the story of a barehanded kill, one whose deadly strike coming in the form of a missing chunk of flesh at the base of the neck. The deer's corpse, twitching in its finals throes. She turns away from Drexton and untangles her self from the grapple hold she had on the deer. The blood pumps in rhythmic squirts from the neck, the deer's mouth is gasping in the act of futile instinct, its eyes darting around frantically. Rhy picks the deers head up and lays it gently in her lap, she coos softly to it, reassuring it, guiding it, as she places her forehead against the bridge of the deers head, just between its eyes. She continues to pet it and cooing softly, a slight melody emerging as she sings softly to it, showing it a nearly bizarre courtesy, comforting it in its final throes, while covered in its gore. A slight shift in the tune as Rhy wraps her arms around the deer's neck, hugging it, and with one swift and violent motion, she twists her whole body, the crick-crack of neckbone echoing off the forest, its ancient trees bearing witness with their cold, silent, stares.
Rhy places the head down gently, her hand brushing across the dead, lifeless eyes of the deer as she closes its eyelids forever. She reaches and sticks two fingers inside the deer's neck wound, the vicious, still warm liquid staining her fingers. With a quick motion, she trails her fingers from her forehead down to the bridge of her nose, and again a stroke under each eye. She reaches behind her at the small of her back, tucked into a waistband keeping her simple animal hide tunic cinched at the waist she pulls put a talon, large and wickedly sharp, mounted to a padded cylinder of wood, formed fitted for her hand to grip comfortable, the long dark claw extending from the middle of her fist. She makes an expert slice down the middle of the carcass, the razor-sharp edge of the talon splitting hide and sinew easily. Tucking the talon away she reach into the corpse, nearly up to her shoulder's depth, as her she bites her lip in concentration, with a quick twist of her arm she extracts it, a dark red lump of muscle a few strands of artery and vein ripped from their place hanging from the once beating heart.
She sniffs the heart and inspects it quickly, nodding in approval at the lack of any disease, parasite, deformity. She stands now, cupping the deer's heart in both hands, and strolls under Drexton's penetrating gaze. She stops a pace in front of him, her crude and basic tunic, barely able to cover her form, shifts and hangs awkwardly. She kneels in front of the Huntmaster, bowing her head and raising her cupped hands in unison upwards to Drexton, '...first bite.', offering it to him in the act of total supplication and submissiveness.

Rhytania wakes up in a cold sweat, her eyes wild from the nightmare. She tugs pointlessly on her bound and leashed hands, the skin at her wrists rubbed raw, the constant struggling forcing the wounds to seep blood. She rolls off the cot and kicks it as far as she can manage, the last thing she remembers was the foul tasting tincture Drexton forced into her mouth, the effects taking hold before she even swallowed. She pulls as far as the rope will allow, back into her corner, where the two walls meet. She closes her eyes and focuses her attention inward. She chants and prays softly, knowing without her focii or holy-symbol bridging that gap to the divine, not to mention the possibility of strong wards in this makeshift prison, would be nigh impossible.
Top

Next installment of: As The Circle Turns

Since this is involving a few other players and different groups, feel free to add your own logs, or entries, so people who peruse this thread can have a enjoy a somewhat complete picture. 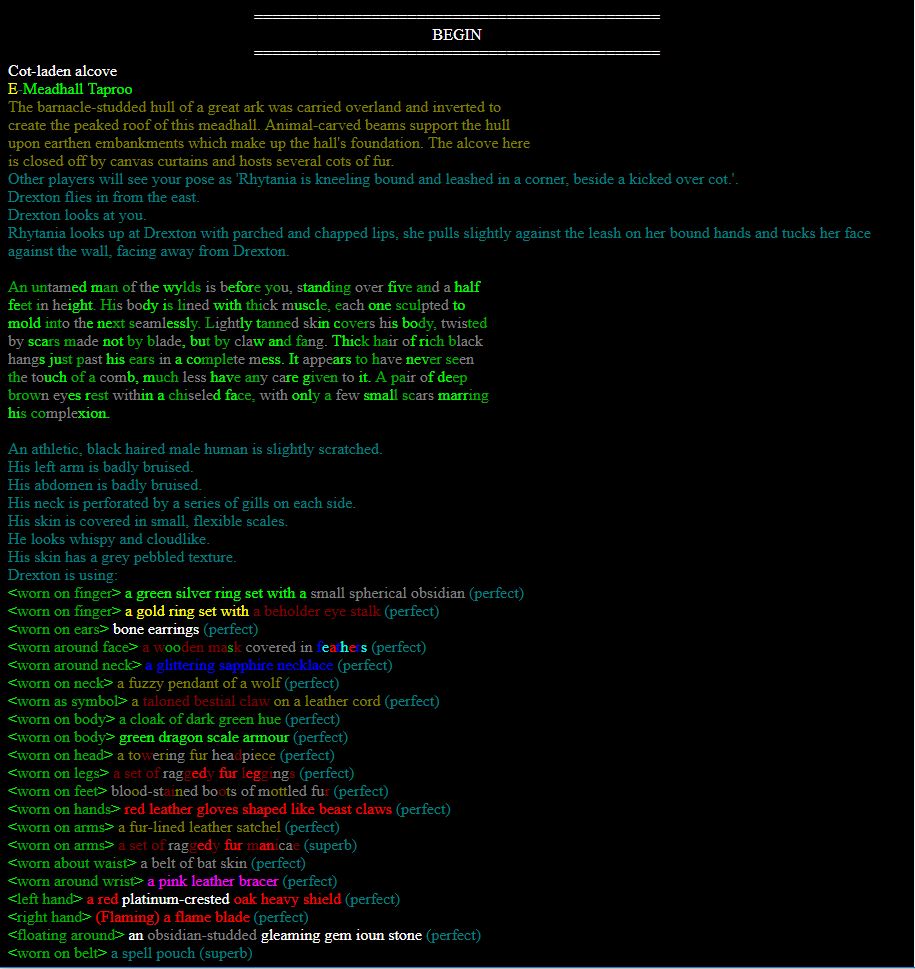 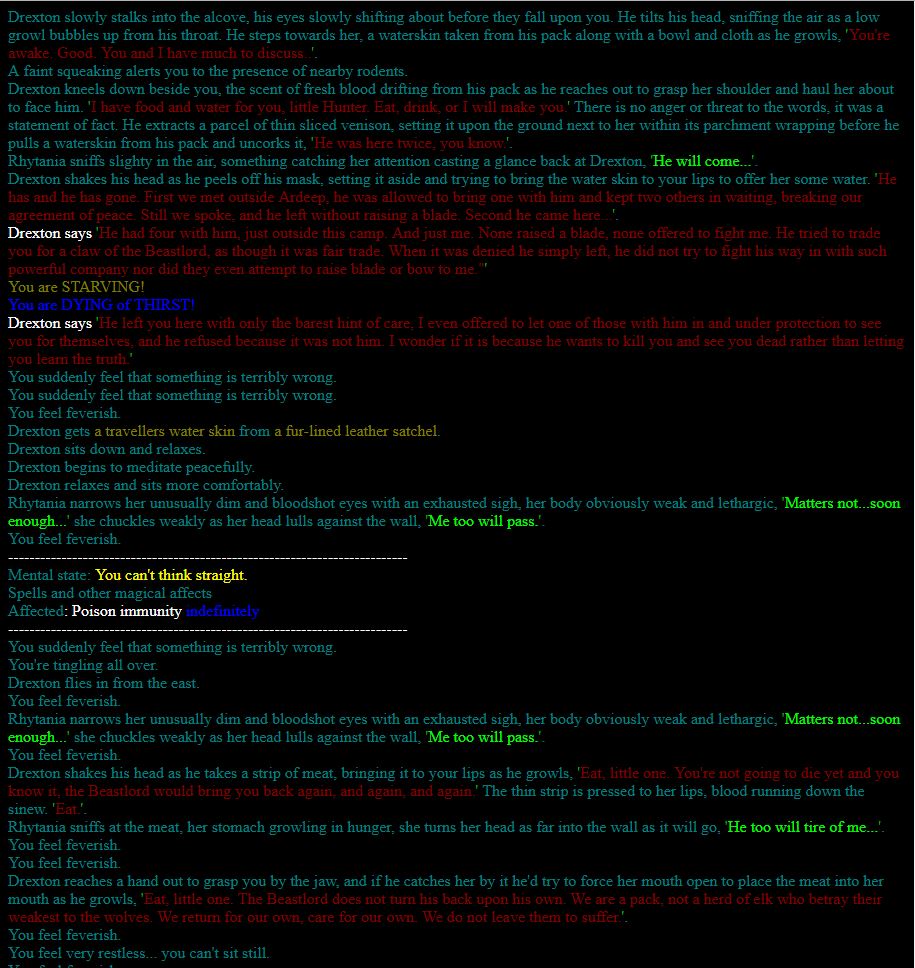 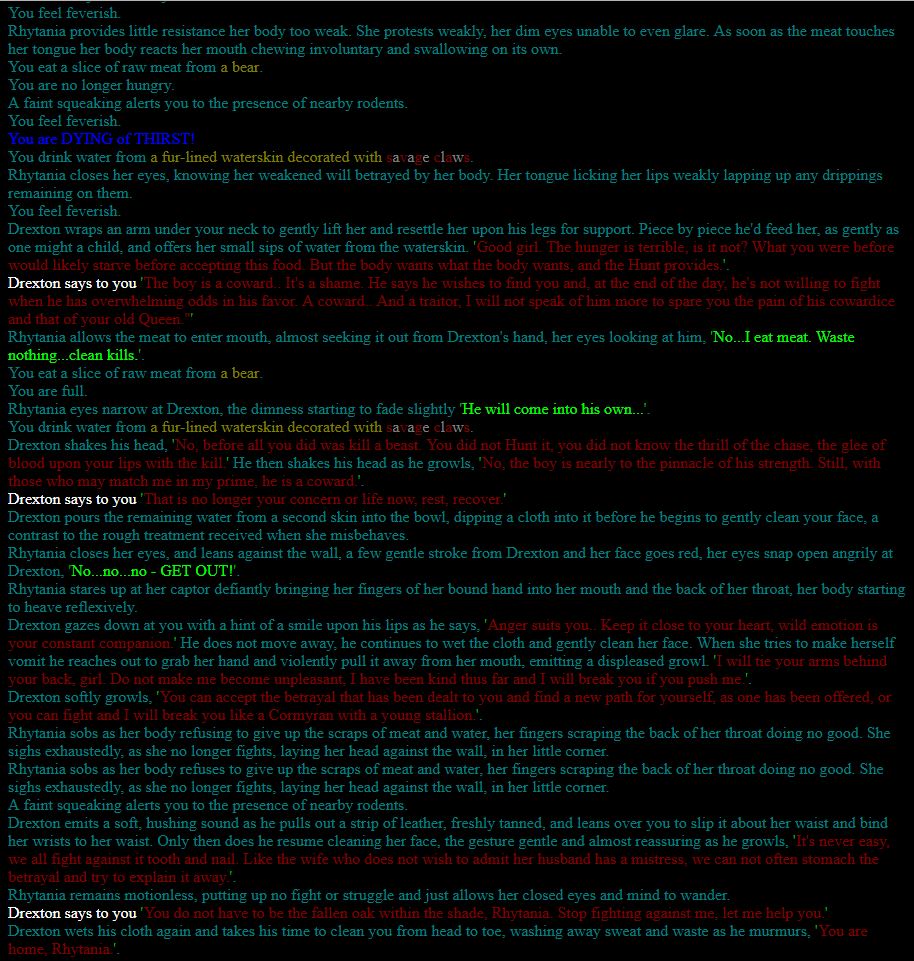 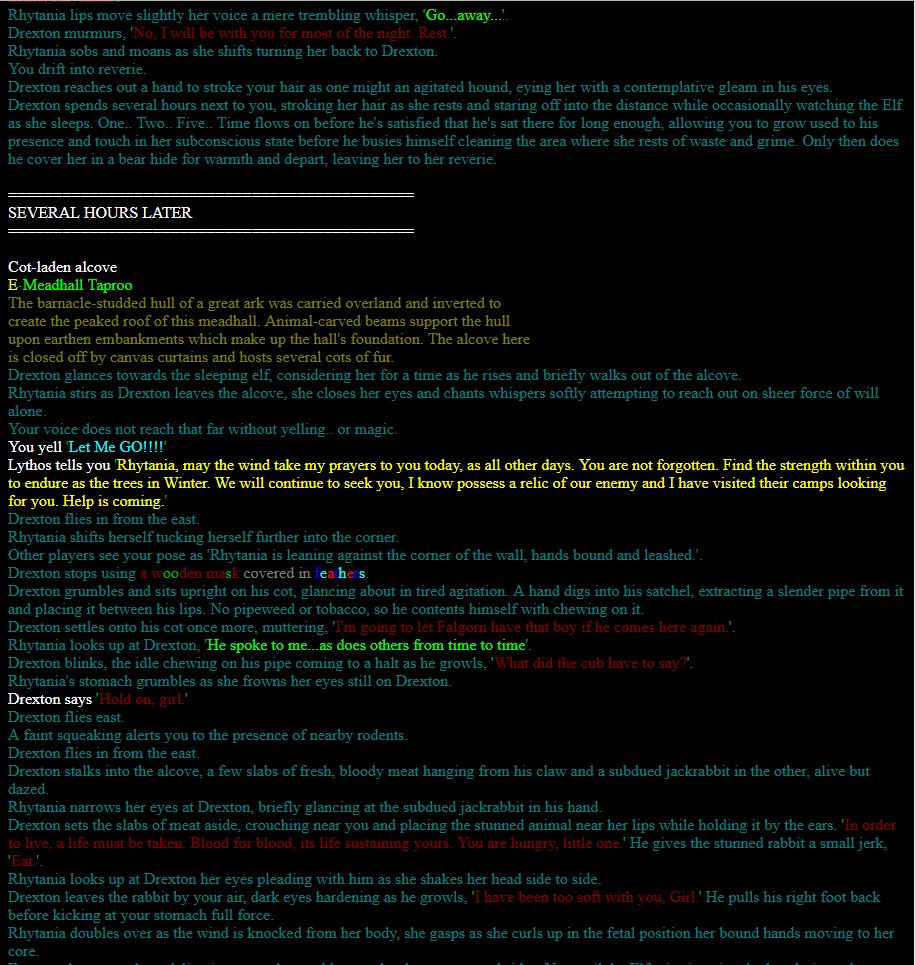 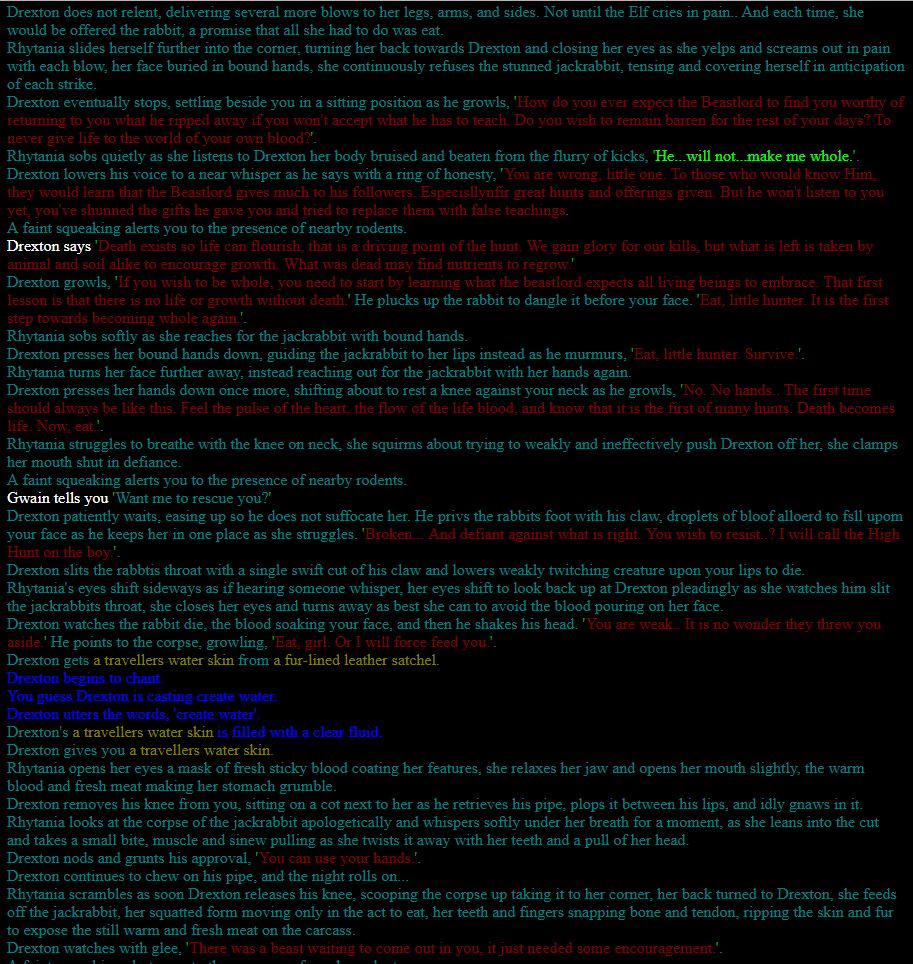 A meeting between the Huntmaster and Forestarm looming, Niccele of Tymora and Elisabeth of Tyr are called for advisement. They urge against seeking peaceful talks with Beasts of the Hunt...

A time later, with brief and unfriendly word having been exchanged with the Huntmaster by amulet, Elisabeth is called to the outskirts of Ardeep...

...But if thou hast done evil, fear her. For she beareth not her sword in vain. For she is the Lord's instrument: a wrathful avenger unto the wicked.
Top
Post Reply
7 posts • Page 1 of 1

Return to “Stories from the Forgotten Kingdoms”